The Compromise of Grey | Ways of the Force

By Arisaig: an apprentice of TotJO offers an interesting insight into the fenomena Grey Jedi. 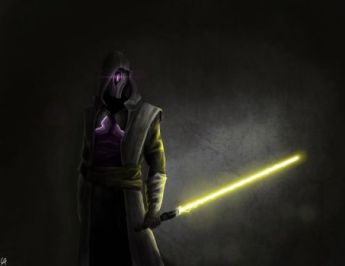 “We’ve all seen them about. They come in saying they’re unique because of their Path, and that they do not fear the dark like the Jedi but are more restrained than the Sith. I am talking, of course, of those that proclaim themselves to be Grey Jedi” : Arisaig

Now, for a supposedly alternative Path, it is a clear majority of the Force community that claim the title of Grey. Why is this? What does it mean? And why do people choose this Path?

Right off the bat, we can account human nature. When presented with two options that are, supposedly well walked, a person can feel the temptation to be unique. And what is more unique than the middle path between two extremes? Sadly, people choose this Path for this reason despite the fact it is a popular path. In their attempt to stand out, they end up blending into the background. It’s a cruel irony.

Why else would a person be attracted to this Path? Well, to put it simply, because it is an excuse for stagnating and falling short.

The Jedi Path is hard. Impossible even. The ideals set forth aren’t achievable by a flawed human, and we are all flawed humans. We can only strive continuously toward those ideals, waiting on those four or five moments that define us. And some people find that impossible ideal, well, intimidating. People don’t like failure, so rather than fail alongside those striving towards the impossible ideal, they make their own ideal, or align themselves to an ideal they’ve already become accomplished in. We see this in the countless Grey Codes, each one slightly varied from the next, each with varying levels of embracing of “darker” emotions such as passion and chaos.

The Codes, both Jedi and Sith, are impossible ideals that one can spend a lifetime chasing after, perhaps never achieving it. They are akin to the Ten Commandments of the Bible. Impossible ideals that require the intervention of a saviour character. They point out how often we fall short but offer salvation through the Messiah. But the Jedi have no saviour. There is only the Force, and the Force resides within us. If we fail, we have only ourselves to blame. And fail we will, because we are flawed. The Jedi dedicated their life to the pursuit of these failures and to rise above them or, at least, to learn to live alongside them.

It is a process of evolution. We fail, and we can either die off, ending our personal evolutionary chain, or we can grow from it, creating a better version of ourselves, one that will not fail as quickly as the previous version. It is the miracle that creates the Jedi. We refuse to die out, to end the pursuit of betterment. But many, a majority even, will become discouraged in this pursuit and either give up. Or, in the case of the Grey, create their own ideal to reach for, one that is achievable, or they have already achieved.

So, why is this? Why do people feel this need to strive for these codes of compromise? Because they are unwilling to push themselves towards the impossible or they have become discouraged during their walk down towards the impossible? So, as previously mentioned, they create an ideal that they can reach, or even one that they’ve already reached. That is where the plethora of Grey Codes come into play. People can pretty much pick and mix the one they like, often lining up with their current views, so they can feel that they have achieved what others spend a lifetime working towards. They can say they are great Jedi because they become the epitome of their self-created ideal.

The Grey Path becomes a comforting lie that they can tell themselves. People do not flock to the truth, nor do they enjoy being told by anyone (including themselves) that they are far from perfect. This, the Jedi Path, is not meant to be easy. It’s not an overnight venture. It’s a lifelong journey, and one full of mountains and pitfalls. It is one where a person will fall and hurt themselves. It is one where one can experience the joy of accomplishment. The Grey Path allows for that last part, joy, without the hard work and the pain involved.

It is said a meal never tastes better after you’ve worked hard for it. That same meal, given freely and every day without any work becomes bland. That is what the Grey Path offers, bland rewards always. This, I believe, is a contributing reason as to why those that profess themselves as Grey do not stick around very long, losing their way. What is there to strive towards when you already personify the ideal? It’s like cheating in a video game. Yeah, you’ll have all you wanted, but at what cost? The joy of the game. The joy of overcoming bosses (even those within your own mind and soul). The joy of finally getting that rare item. The joy of finding yourself at the highest peak. Yeah, you could have cheated your way there, or even started there, but it takes the fun and challenge out of it.

Another parallel we can draw is the forging of a sword from raw iron. An excellent sword can take a long time to create, but a cheap sword is often easily constructed… and easily broken. The Jedi looks at their flawed blade, themselves, and see where they can improve. They find better materials to incorporate into their blade. They put the blade through the forge time and time again. They fold the billet, stressing out the metal. They quench the blade, causing it to flex violently, making it brittle, glasslike. Then they can put it through a tempering process to relax the crystalline structure of the metal, making is strong, but flexible, able to stand up better to the tests of the world and the battles it may face. The blacksmith refines out flaws or learns to best use those flaws to strengthen the blade. They make no excuses for a bad blade. The blacksmith knows they must continue to enhance their skills to ensure their blades are the best they can make, and that is a journey that can take a lifetime of practice to make excellent blades.

A third, and final, parallel we can draw is in that of the Hero’s Journey. An excellent story, and one that creates the greatest of heroes, are those that offer paths out. Several times the hero must be offered a way to escape, to go back to what their old life, or to stop where they are rather than continue climbing the unbeatable mountain. The Grey is akin to one of those alternate Paths. It allows for shortcoming, or to go back to where they started. There are four or five moments in our lives that allow for us to choose going back, to give up. The Jedi refuses to give up. They will choose the harder Path because it is right. They choose to continue walking the perilous and rarely walked Path, so they can be the best version of themselves they can be so to best be able to serve others.

Now some people like referring to a definition they’ve found online of “Grey” Jedi. One such definition applies to those that have learned of the Force outside an established Jedi Temple and another is those that go against the wishes of the Council. To this I say, well… haven’t we all learned of the Force before joining a Temple? Why would we join a Jedi Temple if we had not felt it before? By that definition, everyone is a Grey, as those learning of the Force only after joining a Temple reside (as of now) solely within the fiction. And what of the other definition, about those that go against the wishes of the Council? To that… well, would that not mean only those that are “proper” Jedi sheep? Nodding their heads and obeying blindly? Ideally, we would all get along, but flawed human nature gets in the way. We have disagreements. Some more than others. But some of those that are bolder in their stances, even if they go against their respective Council, identify as Jedi, not Grey Jedi.

So, to go back to the original questions, why is this? What does it mean? And why do people choose this Path? In summation, because it is easier than the alternative. It means that those following it are willing to take the quick and easy Path. And finally, because it is tempting. Humans are naturally lazy. It is because of that laziness that we have accomplished many great things to make life easier. The Jedi thrives on challenge and struggle. They do not wish to make their lives easier, but instead to learn how to more effectively climb the mountain. Where the Jedi takes weeks to summit a mountain, the Grey will helicopter in halfway, if not to the top. Where the Jedi summits one mountain and immediately sets his gaze on a higher vantage, the Grey settles for the mountain they find themselves atop of, if they ever start climbing to begin with.

The Jedi Code is a call towards the unachievable. We may not ever get there. But we do not walk this Path for the end goal, but for the journey. We detach ourselves from failure, learning to view shortcomings not as the end of the Path, but as a challenge towards a better tomorrow. The Grey Path offers an escape from that, an over-embracing of flaws rather than holding oneself accountable towards excellence.

This is not an attack on Grey, however. It is a wake-up call to those that have stagnated under the guise of the ironic “alternative” popular Path. I believe it to be part of the Path to encourage others to continue climbing, to abandon their camp or to get back onto the rarely walked Path towards the infinitely high summit. Many do not heed that call. But that is what separates the Jedi from whom we were before. The draw towards the simpler yesterday is strong indeed. The draw towards giving up on this impossible ideal is doubly as powerful. But the Jedi does not give up or compromise. And that, my fellow Jedi, is why one should avoid the Grey Ideal. Because it pulls one towards walking backwards, if not stagnating entirely. Resist the pull towards less, strive towards greatness, and never give up during the climb up the impossible mountain that is the Jedi’s Path.